The Neighborhood Features That Drag Down Your Home Value—Ranked

When it comes to real estate clichés, “Location, location, location” has all other contenders (including “Not a drive-by!”; “Cash is king!”; “Is that your checkbook or are you just glad to see me?”; and “Worst house, best street”) beat by a mile. Not only has it been in use since at least 1926 (according to the New York Times), but it’s utterly and inarguably true.

More than any other single factor, when you buy a home in a good location, it’s usually a solid long-term investment. And being the unabashed optimists we are here atrealtor.com®, we focus most on the factors that help maximize your home’s value. But hey, life—and real estate—isn’t always rainbows and unicorns. So this week we decided to take a look at the downers: those things that actually keep you from getting top dollar from your home.

The list itself probably won’t surprise you, but the numbers just might. Who would have thought that it’s a worse investment (by far!) to buy in a bad school district than near a strip club or a homeless shelter? Beyond strippers, that is.

So how’d we do it? We looked at home prices and appreciation rates in U.S. ZIP codes where a specific drag-me-down facility such as a power plant is present. For each facility, we calculated the drag, or a “location discount,” by comparing the median home price of the ZIP codes with that facility with the median price for all homes in the same county. We limited our scope to the 100 largest metropolitan areas, since rural communities have lower home prices and slower appreciation.

Got it? Have a look at the list based on how badly your home’s value will get dinged: 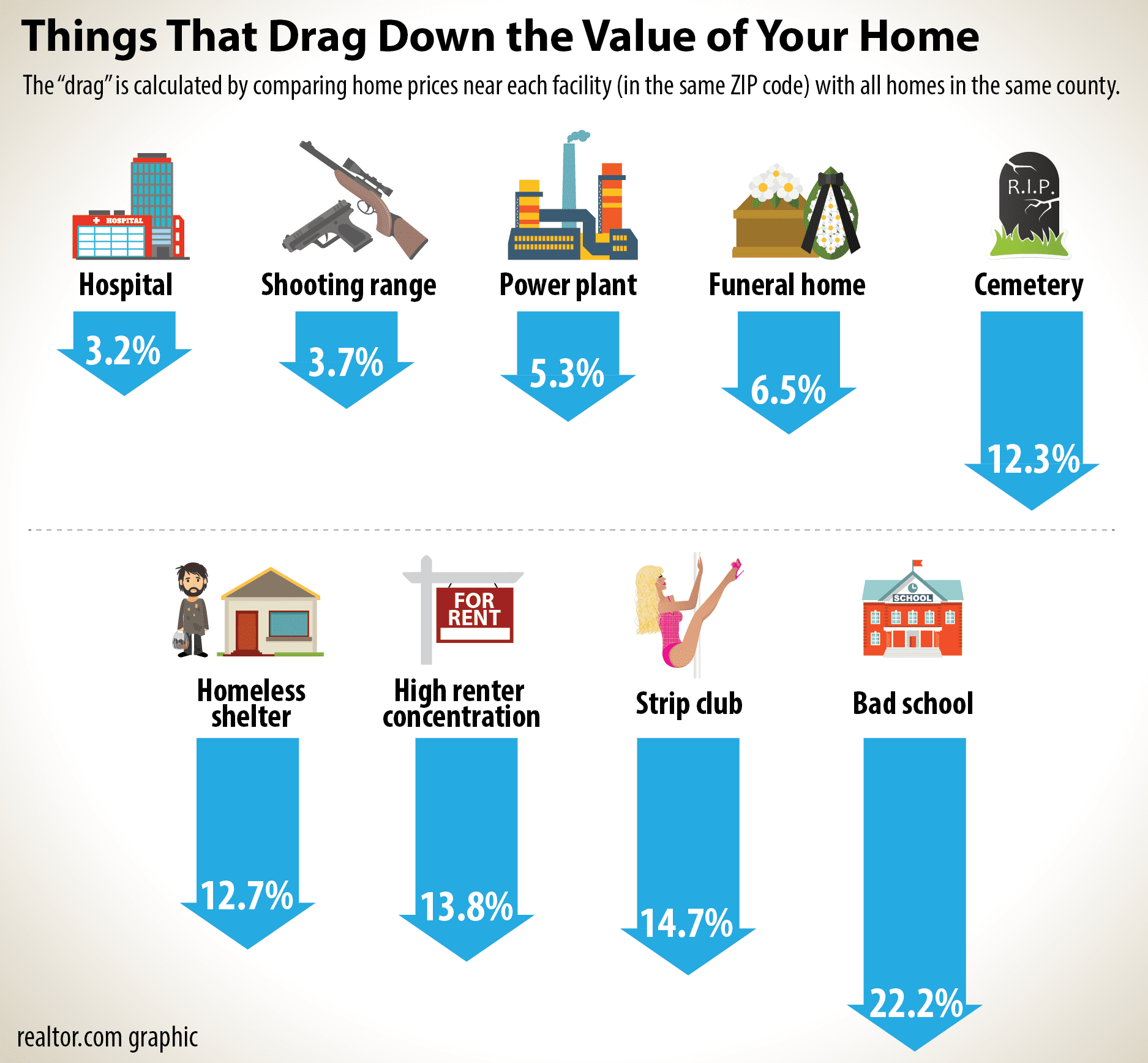 Keep in mind the difference between causation and correlation: Does having a cemetery or shooting range in the neighborhood cause home prices to drop? Or are those businesses drawn to the area because of cheap real estate? We don’t have a definite answer, but their presence is generally a sign that a neighborhood is the opposite of up-and-coming. Judge your investment accordingly.

Hospitals are awesome, right? Having a great one within easy access is just about every homeowner’s goal. But easy access is one thing, and being woken up by ambulance sirens—or, god forbid, medical helicopters—at 3 a.m. is quite another. Among homeowners who sold in 2015, those near a hospital generally got 3% less than an average home in the same county would get, based on our sales deed records and hospital location data from data.medical.gov. In the world of real estate price demerits, 3% isn’t a lot, so clearly plenty of people are willing to overlook some noise and chaos in favor of nearby medical care.

According to most research, it’s not the guns or the people who shoot them that the neighbors of shooting ranges object to most; it’s more the idea of the places and, in some cases, the noise of gunfire, especially outdoor gun ranges. More perceived problems: environmental concerns, including the lead that leaches off spent shells, potentially poisoning soil and water. Last year, a closed gun club in San Francisco triggered $22 million in cleanup fees, the San Francisco Chronicle reported. We used gun range locations from wheretoshoot.org.

There are more than 8,000 power plants across the U.S., according to the Environmental Information Agency. Much as we are grateful for the modern convenience of electricity (thanks, Ben Franklin!), the huge facilities spur more NIMBY (“not in my backyard”) movements than anything this side of waste treatment facilities. The most frequently cited reason: safety concerns. The perceived dangers of living near a power plant vary dramatically depending on type, from the seemingly harmless solar to the dreaded nuclear. In general, having a power plant in the neighborhood is associated with lower property prices.

Some people believe you get bad spiritual energy from living near a funeral home; some just dislike the traffic caused by service workers and funeral attendees; and others fear that the smoke from a crematorium is toxic. But plenty of folks just find them seriouslycreepy, an unpleasant constant reminder of our own mortality. Our analysis of property values near funeral homes listed on legacy.com seems to confirm the stigma. Properties near a funeral home see a 6.5% drop in price compared to all homes in the same county.

Call it superstition, call it irrational fear, but there’s an awful lot of people who find the prospect of living near lots of buried bodies unpleasant or downright terrifying (see: Funeral homes). To be fair, there are some people who seriously dig how quiet the neighbors are, but they’re outnumbered by the haters. To do the research, we used a list of federal and state cemeteries operated by the Department of Veterans Affairs and found that the median price of ZIP codes with a cemetery is about 12% lower than neighboring areas.

Homeless shelters can be unloved and unwanted misfits in residential areas. Even though there’s no rule that homeless shelters are usually accompanied by higher rates of crime, shelters do certainly attract motley groups of people, necessitate emergency calls, and require more police in otherwise quiet, safe neighborhoods. Shelter locations, listed on homelessshelterdirectory.org, are often limited to less prime areas in the city where home values are about 13% less.

Does a cluster of rental buildings—or lots of them—lower the property value in a neighborhood? Many homeowners have pondered this. While it’s hard to do an analysis down to every property, we found that ZIP codes with a higher-than-average concentration of renters have lower property values compared to the county they are located in—by 14%. The data are from the American Community Survey.

Catering to adult vices—and often (rightly) associated with loud music and less-than-savory visitors—a “gentlemen’s club” is an unwelcome neighbor on the block. We tracked nearly 2,000 strip joints listed on stripclublist.com and ranked the category high on our “unwanted” list. In one extreme case, the crime-plagued neighborhood of Washington Park in East St. Louis, IL—the ZIP code 62204—has 10 strip clubs.10! How do they all compete? It saw only a handful of homes sold in the past three years, with a median price of $10,000.

While a top-performing school is definitely a plus for your property value, a bad school is a complete, out-and-out disaster. A school where one teacher handles a class of 40 students with a slim graduation rate is usually an indicator of a deprived neighborhood. The median home price of ZIP codes with schools that receive a 1 to 3 rating (out of a possible 10) from GreatSchools.org is only $155,000.